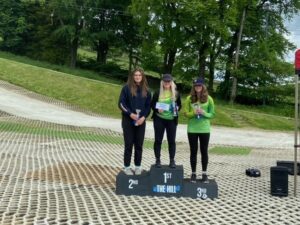 Pupil Issabelle is happy to be going downhill fast as she took to the podium in her recent competition.

Issabelle, 15 is a young skier and has been competing all over Europe in the last few years.

Her most recent event though was close to home in the Club National Race at her club Rossendale Ski Slope, where she works under coaches Gordon Wellens, Declan Huppach, Stuart Haselgrove and Chris Royle.

“I think I have improved a lot recently,” said Issabelle who has been skiing for 13 years.

“I am now getting on the podiums which is a big step up for me.”

Issabelle, whose dad has a ski shop in Adlington, went to Champery in Switzerland in March, couldn’t compete due to the weather but enjoyed a strong week of all-weather training. 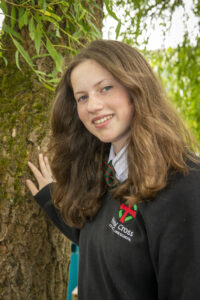 She usually has to train on the dry slope at Ski Rossendale but sometimes trains at Chill Factor in Manchester for indoor race practice.

She says her inspiration is fellow Lancastrian Dave Ryding who, at 35, celebrated Great Britain’s first ever World Cup win in January this year.

“He is amazing and a big inspiration for me. He said ‘never give up’ and that’s what I believe.

“I enjoy skiing, it’s relaxing, it allows me to travel around and I have made many friends through skiing.

“I want to do my A-Levels and perhaps become an instructor in the future but, at the moment, I am concentrating on competing.”