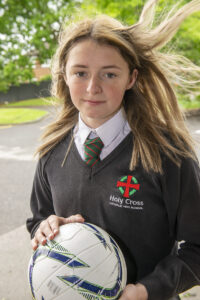 The 15-year-old was part of the Lancashire Under 16s team which won the English Schools National Final recently after they beat Kent 4-1 in the Inter County Cup at Stoke City’s bet365 Stadium.

“It was fantastic to play at such a big stadium, it was a good experience,” said Teal who said she was ‘happy’ when she saw her name on the team sheet.

She used to play for Euxton Girls team and then captained Adlington Juniors boys team before moving onto Blackburn Rovers where she still is.

“I played right wing for Lancashire but I don’t mind where I play,” said Teal. “I enjoy playing for Blackburn and my dream is to play for England.”