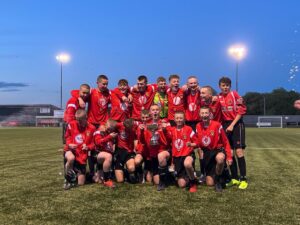 Our Year 9 Boys are Lancashire Champions after winning the U14 Kay Cup.

The team beat Longridge 2-1 in a close game at Darwen AFC to lift the trophy.

Longridge took the lead just after half-time with Holy Cross captain Joe levelling from the spot and Alfie scored the winner with just 10 minutes to go.

Captain Joe, who has just signed a scholarship at Burnley’s Academy, said: “We didn’t play very well in the first half, our standards dropped, but we said we needed to keep calm at half-time.

“Then straight away Longridge scored but we seemed to need them to score to get going and then we played well.

“The pitch was nice and we had good support so it was exciting.

“We didn’t expect to win but, once in a final, you do everything to win.

“It’s a nice feeling to lift the cup and be champions of Lancashire.”

PE teacher Ms Dent said: “We haven’t been in an U14 final since 1987 and the boys really did do us all proud – they played with grit, determination and there was some phenomenal play.

“Also, a huge thank you to all staff that made it to AFC Darwen to support, we were talking to the lads at the end, and they couldn’t believe how many teachers had turned up to watch them. The support from staff and our pupils was brilliant.”