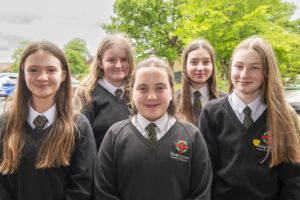 Holy Cross pupils will see their ‘Bebar’ product come to life after winning first place in the STEM Unilever Inspire Programme against 28 other schools in the North-West.

The Year 8s boys team received high praise in the All About STEM and Bright Future’s Programme where they had to design a new sustainable product and they chose the area of beauty.

Ciaran, Alex, Ethan and Joseph, under the watchful eye of science teacher Miss Lowe, all researched their product and came up with a shampoo bar.

“I was really shocked we won,” said Alex, who wants to be an architect. “We decided to look at shampoo.

“We started first looking at the packaging and we were going to make it liquid with a dispenser.

“We researched corn starch packaging so it’s biodegradable and environmentally friendly and added wax to make it waterproof.”

Ciaran said: “We then decided it would better to be concentrated and solid and so we decided to have a bar of shampoo which you can snap off and use. It also means less water will be used and less waste. ”

Ethan, who wants to be a surgeon, said: “We were surprised when they said we had won as Holy Cross have never won before.” 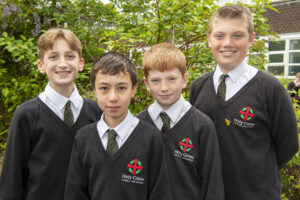 Joseph wants to be an NFL player but says he loves sciences!

The Unilever judges praised the Holy Cross team. They said of the idea: ‘A professional presentation on the sustainable shampoo ‘Bebar’ with in-depth ingredient research.

“The boys also considered impaired consumers during their design process.

“It was a really thorough presentation, they thought everything through and used data to back it up. We were blown away.”

The Holy Cross girls group came up with an eco-friendly face mask and were praised by the judges for their idea.

The group carried out interviews, tried out different fruits and also wanted to make something which a lot of people can use.

Miss Lowe said: ‘I am really proud of what both teams have achieved. They both came up with some really innovative ideas and put lots of time and effort into their projects.’

All nine pupils were awarded bronze CREST awards as well as participation certificates, and the winning team have won a glass trophy, Unilever goodie bags, £500 worth of STEM resources along with a trip to Unilever Port Sunlight in September to bring their idea to life.