In a Super League of His Own 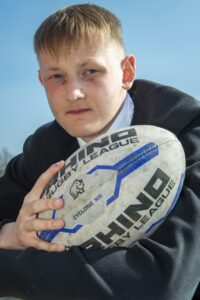 Year 11 pupil Deacon has made his scholarship debut for St Helens – and says it’s the biggest moment of his rugby career so far.

Deacon has been playing rugby since he was seven and earned a scholarship at St Helens.

“I played my first scholarship game, it was at the Totally Wicked Stadium, against Leeds and we won 28-20,” said the second row.

“There were a few hundred people watching and it was the biggest game in my rugby career so far.

“It was a great experience. We will play every two weeks on a Wednesday so I am hoping to be involved in a lot more games.”