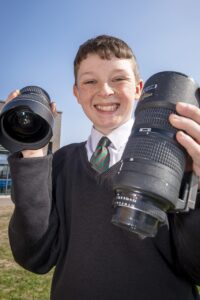 Isaac said he had one of the best days of his life when he was an official photographer for a Premier League game.

Burnley FC photographer Andy Ford takes photographs at Holy Cross and, when he last came in, Isaac expressed an interest in photography.

Andy took Isaac along to the recent Burnley v Chelsea game at Turf Moor and Isaac said it was an ‘amazing experience.’

“It was one of the best days of my life, I didn’t stop talking about it when I got home,” said Isaac.

“I was given a lanyard and a hi-vis vest and we took pictures as the players warmed-up.

“I was so close and when Mason Mount came over I waved at him as I was in shock!

“Andy showed me how to build the camera, use an SD card, and how to upload and download pictures.

“He also gave me a camera he doesn’t use which I never expected.

“I have been practising since and I want to be a sports photographer now.”