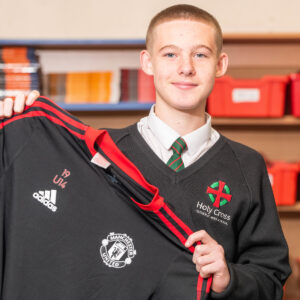 Joseph admitted his dream is to be a footballer – and is still pinching himself that he is on the right road.

Joseph has played for Manchester United since the age of five and is now 14.

“I can’t really remember how I got scouted but it’s all I have known,” said the left back. “My dream is to be a footballer and it’s actually partly true now although you never know what can happen.

“Every year we get called in and told if we are staying on and it is a really nervous time. I have had good friends who have been released and you do feel guilty that you have got a contract.

“You hope it never happens to you as I have never been dropped but I know, if it happens, I will find a new club. It is great being at Manchester United though, you get picked up and taken to training and it’s a top level.”

Joseph has also been selected for Lancashire Under 14s.

“That’s a proud moment, I haven’t yet represented my county as it clashes with Man United games but it’s the first time I have been on trial for my county so it’s huge to make it into the squad.”