Chloe is shooting for success 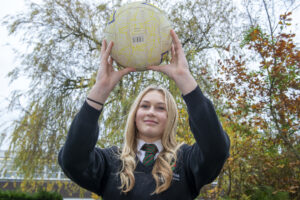 Year 9 Chloe admits it’s non-stop training as she strives to achieve her ambition of playing netball for England.

“I have been playing netball since Year 2,” said Chloe, who won the trophy for the Most Improved Player when in Thunder’s Under 13s. “My favourite position is wing defence, but I also play goal defence and centre.

“I just love netball. I train on alternate Mondays with Manchester Thunder, every Wednesday with Greater Manchester and Thursdays, Saturday mornings and play a match every Sunday of the season with Oldham. 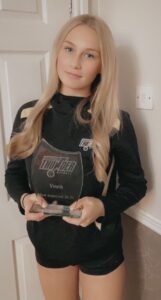 “I only have Tuesdays off and I usually go running on that day!

“The Manchester Thunder trials for Under 14s were really competitive. I think there were more than 200 girls there and they cut it down to around 20-25.

“My aim is to get onto the Thunder’s Future’s Academy age 16 and then there is a pathway.

“My life revolves around netball, and I hope one day to play for England.

“It’s great at Manchester Thunder as former England Head Coach Tracey Neville comes along and gives us tips, she is a great role model for me.”