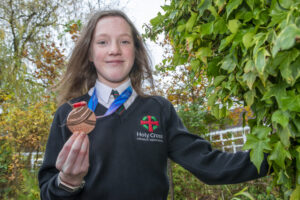 Year 9 Amber has qualified for the British Gymnastic Championships next year – and is following in the footsteps of her sister Abby.

Holy Cross Catholic High School pupil Amber admitted she only took part in the qualifiers, held in Stoke recently, just to see what stage she was at with her gymnastics.

However, she finished a stunning third and the top three qualify for next year’s British Gymnastics Championships held in Liverpool.

Sister Abby, a former Holy Cross pupil and now at Runshaw College, is a National Elite Level gymnast and will take part in this year’s British Championships later this month.

Amber said: “I got into gymnastics when I was three as I went along with my sister to Appley Bridge Gymnastics Club. 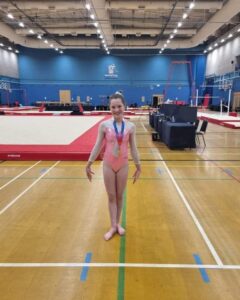 “Obviously I couldn’t train as much during lockdown and I had Covid so my coach and I only decided to enter the qualifiers two weeks ago. This meant I didn’t have much time to work on my routine.

“I took part in the vault, the Asymmetric bars, the beam and the floor, with my strongest the bar.

“It was a really good competition, I have been before to big competitions with a team before but never as an individual.

“I guess I had nothing to lose and I was shocked when I came third and now I have plenty of time to prepare my routines and my best skills for next year’s Championships!”