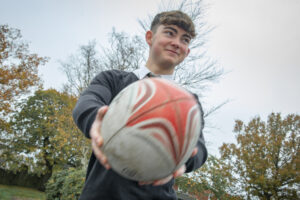 Scrum-half Harry is hoping to be spotted by scouts as he looks to pursue a career in rugby league.

Harry plays for Leigh East and has attended the programme, with special coaching sessions, for three weeks and hopes to go on more.

“It’s a way to be recognised,” said Harry. “I have taken part in the Future’s programme every Monday for three weeks and it’s a way for coaches to spot you.

“I know how hard it is to be scouted and it is rare but I am determined and I would love a career in rugby league.