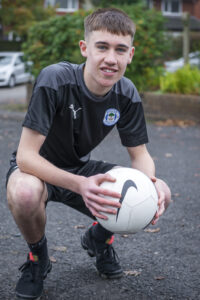 Goalkeeper Harry hopes Wigan Athletic will be in safe hands in the future.

The 14-year-old has been with the Latics for seven years.

“I have always been a goalkeeper,” said Harry. “I think when I was about six I was playing for Charnock Richard and went into the net for one session. I really enjoyed it and stayed there!”

Harry has come up the age grades with League One Wigan and is competing for their Academy.

“We won against Sheffield United in the Floodlit Cup recently and I saved a penalty which helped us go through to the next stage so I was proud of that. We play Manchester City next and, if we get through that, we could be up against teams from London.

“I love playing and training. I go on day release from school to the club to work on my game.

“I would say I am good at communication, I talk and shout a lot!

“I would also say my distribution is strong.

“I have trained with the first team goalkeepers at Wigan once and that was great, I also train with the Under 18s which helps my game.

“I want to get a Scholarship at Wigan and I should get to know if I have soon.

“My aim is to be a professional footballer.”