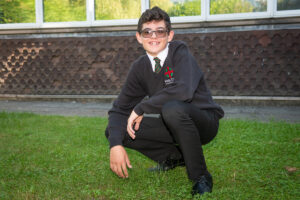 Pupil Daniel is proving a big hit in the golfing world even though he has only just turned 13.

Daniel has been golfing since he was around four, joining in with his dad and brother as they played, and is a member of both Bolton Old Links and Pleasington Golf Clubs.

He has reduced his handicap from 6.5 to 2.9 over the summer and has earned a place on the Junior European Open, in association with Sky Sports, in Spain in February next year.

“That’s really exciting,” said Daniel. “Around 115 players qualify and there are over 50 qualifying competitions and I took part in one, finished third, and got through in that which is a big step in my golf career.”

Daniel has had a busy summer.

He represented Holy Cross in the England Schools competition which was over 36 holes and he finished in mid-table, a strong result considering, with Daniel then 12-years-old, most of the other competitors were 15 or 16.

He then took part in the Reid Trophy in Watford, competing against the world’s best Under 14s, after qualifying for the event.

“I was one of the youngest again so I was happy with my performance.”

Then recently he played for Lancashire Under 14s against Cheshire and won points for his team, both in the doubles and individual formats

“I have been practising every day and I just love golf. My hero is Tiger Woods and I have been watching videos of his comeback at The Masters.

“I am lucky enough to have a putting green in my back garden which we put in at the start of lockdown so I have been able to keep up with my golf.

“Luckily I am ok under pressure!”