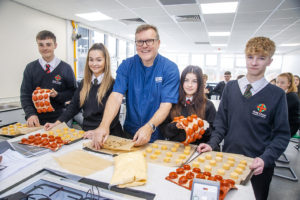 The Michelin-star chef, who was born in Accrington, came into the school to talk to Year 10 and 11 pupils about his life, give them a practical demonstration on preparing food and they also got the chance to turn their hand to decorating profiteroles under his watchful eye.

Nigel gave a brief resume of his career which started at Accrington College, before going onto the Grosvenor House Hotel in London, five years in Switzerland and then becoming involved at Northcote Manor and winning the Egon Ronay Chef of the Year award in 1995.

His reputation has continued to grow and he has appeared on television shows including Masterchef, Great British Menu and Saturday Kitchen.

“We talk about having a passion for things and, after football, I had an obsession with cooking,” said the Blackburn Rovers fan, which led to him starting his Obsession Festival 20 years ago.

“The hospitality industry is a fascinating industry to work in.”

Year 11 GCSE pupil Lily-Kate said: “It was exciting to have a chef here and learn new things.”

Head of Food and Nutrition Mr Callander said: “It’s superb for the pupils to get the chance to meet and learn from a celebrity chef.

“We have large numbers of pupils at Holy Cross studying Food and Nutrition and this gives them a different insight into what opportunities there are out there for them.”