It’s good to talk about football! 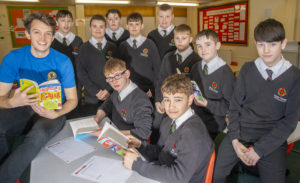 Holy Cross pupils got to talk about football in their lessons with a visit from author Matt Oldfield.

The books are fun-packed biographies of the world’s greatest footballers, from Maradona through to Messi, from Beckham through to Kane.

The aim of Matt’s visit was to encourage pupils to read and write and he spoke to Year Seven, Eight and Nine pupils as well as primary school pupils who came into school, as well as holding workshops.

“I loved reading and writing when I was younger, I loved football and telling stories so this combined everything,” said Matt, who told the pupils he was a Southampton fan.

“When I was younger there wasn’t children’s books like these so we wanted there to be fun-filled books about our heroes which are accessible to everyone.

“We wanted to look at how they began their careers, how they dealt with setbacks and how they went on to become football heroes so it’s also about showing resilience and determination as well as encouraging pupils to read.”

Many of the pupils said they had read Matt’s books and asked a host of questions.

“These books appeal to everyone, especially those who are less likely to read, and all the pupils showed a great deal of knowledge about their football heroes.

“We had small group workshops which focused on resilience and bouncing back from any setbacks which we might come across which was another important lesson.”