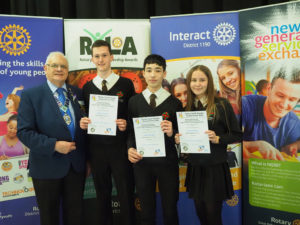 On Saturday our senior team competed in the District Final of the Rotary Youth Speaks Competition, which took place at Windermere School.

The team spoke eloquently and powerfully on the topic the ‘Snowflake Generation’, competing against 8 others schools from across Lancashire and Cumbria.

The team did Holy Cross and themselves extremely proud and they certainly made an impression on the judges and the audience with their humorous and controversial speech.

We were delighted that Luke Sands was recognised for his talent and efforts in winning the award for Best Speaker.

Each team member has now won an individual award across the different stages of the competition as Adam and Milly were named Best Chairperson and Best Proposer of the Vote of Thanks, respectively, at the Area Competition.

Congratulations to the team!