‘A Night at the Musicals’

Talented Holy Cross pupil Leah will take to the stage at school for the last time in the production ‘A Night at the Musicals.’

The 16-year-old has earned a prestigious full performing arts scholarship at the LMA in Liverpool.

Leah wants to be in the West End and has already appeared in the last school production of ‘Joseph and his Technicolor Dreamcoat’ as narrator and will now take a variety of roles in ‘A Night at the Musicals.’

There will be routines to songs from Rent, Matilda, Billy Elliot, Mamma Mia and more.

Mrs Harrison has written and arranged all of the music for the show, which will be performed by a live band of professional musicians. 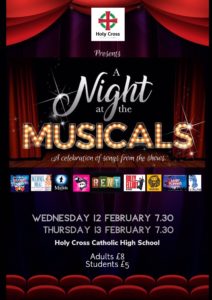 She said: “One of the reasons we do this is to provide the pupils with the best possible platform for their performance.

“We are very aspirational about the shows we produce and we strive for them to be of the highest quality. Our pupils always rise to the occasion. In this show we wanted to showcase the as many of our talented students as possible.”

‘A Night at the Musicals’ is on Wednesday 12th and Thursday 13th February, 7.30pm start, with tickets now on sale priced at £8 for Adults and £5 for pupils.