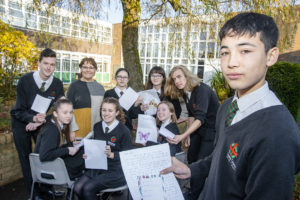 Holy Cross pupils are putting pen to paper in a Chorley Council pilot scheme to help bridge the gap between generations and reach out to older people who may be lonely.

Year 10 pupils have been writing letters to care homes in Chorley and Marley Court, Jasmine Court, Coniston House and Rivington View have responded and set up a pen pal scheme, under the eye of Holy Cross Lay Chaplain, Linda Walmsley.

The pupils have admitted they have got a real buzz out of writing and receiving letters – and also learned a lot.

Adam said: “I want to be a pilot and my pen pal is a 94-year-old lady called Gwyneth who, by sheer coincidence, her husband was an RAF pilot during the war flying Lancaster Bombers.

“She has told me about her life in a munitions factory and it’s really interesting. We are hoping to meet up with our pen pals in the future.

“I have never spoken to anyone so elderly before and you don’t write many letters nowadays so it’s exciting waiting for a letter being sent to school.”

Emma is writing to a lady called Sheila.

“She used to run The Village Chippy in Euxton and one of my options is to go into catering so we have been writing about that.”

Lucy has been writing to John B in Coniston House. “I have been telling him about how I want to be in the police and what I do at school.” The school have worked with Chorley Council to develop the initiative after they learned of the high numbers people living alone or becoming socially isolated in Chorley East.

They are also trying to bridge the gap between the older and younger generations, helping young people to understand that older people have really relevant and interesting life experiences and want to share them.

Mrs Walmsley embraced the project and the pupils discussed what they could do to take it forward. They researched what social isolation and loneliness is by watching hard hitting information videos online.

“There were a lot of ideas but pen pals is simple and do-able,” said Mrs Walmsley. “We contacted all the care homes and have had a good response but it is only the start of our project.

“The pupils are so excited when they receive a letter, they all come through me to monitor the responses, and the pupils are also learning new skills.

“They are learning how to write letters and the art of communication as it’s something which isn’t always done nowadays.

“We are hoping to expand the project into the wider community, so if you, or someone you know would appreciate a card or letter from one of our pupils, you can contact the group by writing to ‘The People Project’ at Holy Cross Catholic High School.”

The next steps hoped for the initiative include:

Chorley Council are hoping more schools will get involved with the scheme and, if any school or organisation is interested, please contact: communities@chorley.gov.uk.