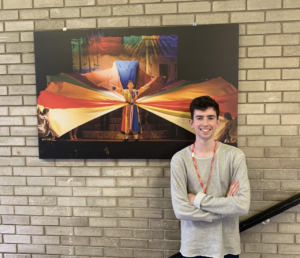 The now 18-year-old, who the Artful Dodger in Oliver and Joseph in Joseph and his Technicolour Dreamcoat in his time at Holy Cross, has secured a place at Mountview Academy of Theatre Arts in London to do their BA (Hons) Musical Theatre course.

“I had to do three separate rounds of auditions which included various workshops in acting, performing two monologues, singing, with two musical theatre songs and dancing, a sort of jazz class,” said Joe.

Joe has been at Cardinal Newman College in Preston studying Drama, Spanish and French.

“I’m also in the ensemble of the National Youth Music Theatre’s production of Anything Goes at The Other Palace in London this summer. I play a sailor called Buck.”