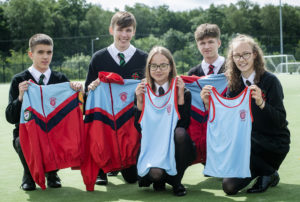 The quintet took part in the Lancashire Schools Track and Field Championships at the Stanley Arena in Blackpool.

Liam, 16, already had the qualifying time for the English finals but raced to victory in the 800m Inter-Boys (Under 17s) at Blackpool to be crowned Lancashire champion. Liam, who runs for Preston Harriers, finished in one minute 57 seconds.

Sprinter Zac, also 16, was also celebrating being the county champion in the 200m Inter-Boys as he finished first in 23 seconds.

Niall, also 16, was superb in the Inter-Boys long jump. He already had the qualifying distance to make the Birmingham finale but also clinched the Lancashire championship.

Lucy, 13, competed in the Junior Girls (Under 15 girls) 300m. Like the others, the Chorley AC runner had the qualifying time but secured her place by being first over the line in Blackpool to be the county champion.

Imogen, sister to Liam, competed in the Junior Girls 800m. The 14-year-old already had the qualifying time and raced into the top two in two minutes 19 to secure her place in the Lancashire team.

PE teacher Mr Stokes, who competed in the Steeplechase at the 2012 London Olympics, said: “It is an amazing achievement for five pupils from one school to make the English schools team.

“It’s also an incredible achievement for the Blackwell family to have brother and sister both qualify for the English Schools Championship.”