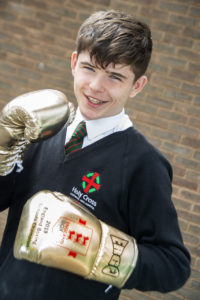 Mikey is an English Boxing National Schools champion – but he is still debating whether to follow it up as a full-time career.

However, he is still not yet giving up on the idea of being a professional footballer either.

“I had my first fight in December 2018 and only had three fights going into the English Boxing Schools Championships in Crawley.

“I thought I would do ok but I didn’t really think I would win. It was amazing when I did, it was a points decision. I thought I had done enough but I wasn’t sure.

“My dad took four fights before he was National Schools Champion so I am proud to get there just before him!

“It means I will now represent England at the Tri-Nations next month in Barnsley, it will be amazing wearing the England kit which I will be fitted out with at the beginning of June.

“If I win that, I will be the best in Great Britain and I could fight in the Europeans in Georgia which would be brilliant.

“My dad is really good with me. I train four times a week but he never says things like ‘this is your biggest fight’ he just tells me to go out and fight and I will win.

“It does help having my dad as my coach. Since October, I have trained hard and also had to change my diet, I have learned a lot about nutrition. I used to just eat anything, especially chips! Now though I really watch what I eat and PE and Food and Nutrition are my favourite subjects at school.”

Mikey wants to be a professional sportsman in the future but football is still proving a temptation.

“I play as a striker for Charnock Richard Under 14s, we play in the Central Lancs Junior Football League and we play every Sunday.

“I am quite fast, strong and tall, I am 6ft, so I like running onto balls into the box and I have scored a lot of goals this season.

“As a team you are with your mates and it’s dependent on everyone performing but in boxing, once you get in the ring, it’s down to you.

“My mates at school are all really proud of me being a National Champion, that makes me happy.

“I have had six fights now and have won all six so I want to keep it going.”